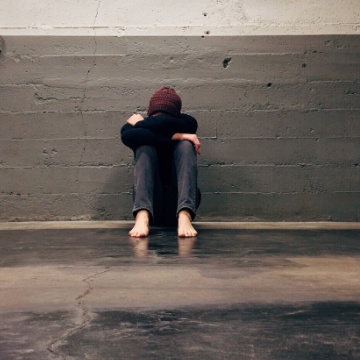 There is a student of mine named Chris, who has become one of my favorite kids in the school. However, we didn't start on great terms. Early in the school year, Chris was consistently late to class (if he showed up at all). He didn't get much work done and preferred socializing with his tablemates.

On the day of my first administrator observation, Chris was acting up and talking over me. I asked him to quiet down, and he stood up, said, "F**k this," and walked straight out of class with his backpack in tow. I was dumbfounded! I couldn't believe this had happened right in front of my administrator, and I was terrified that she thought I had lost control of my students. My heart was racing with fear and embarrassment that I could have let something like this happen. When I got home that night, I started thinking less about my humiliation and wondering more about why Chris may have walked out on me.

The next day, I saw Chris in the hall and asked to speak to him privately. I didn't even have anything planned to say to him; I just knew I needed to address his behavior. It turns out this worked to my benefit. Instead of lecturing him or revisiting classroom rules, my mind went blank, and all I could muster was, "What happened yesterday? I was worried about you". Chris took a deep breath and looked away. I stayed silent, mostly because I wasn't sure what to do. After a long pause, he started telling me about how his mom kicked him out of the house and that he was living on a friend's sofa. He admitted that he was having a bad day and that asking him to quiet down was the straw that broke the camel's back. He then proceeded to apologize for his behavior. I was stunned. Any lingering embarrassment or anger I felt toward him completely melted into empathy. My heart broke thinking about the rejection he must be feeling from his mother and how unsettling it must feel to no longer have his personal space.

Over the following weeks, I got to know more about Chris. I learned about what he did in his free time (working on his car), his goals for the future (automotive trade school), and what made him laugh. I discovered that when I followed up with him more frequently during class, asking him if he understood the assignment, what he needed help with, etc., he was more likely to finish his work. What Chris needed from me was what he lacked at home – structure and consistency.

Although Chris was making slow progress in my class, he failed almost all of his other classes. I started checking in with him weekly and asking him how his Chemistry test went or if he'd started reading the assigned book in English. In the beginning, Chris would report that he had failed his recent assessment or hadn't done his homework. But slowly, he started to come around. Rather than asking him about his classes, he'd proudly approach me in the hall to announce that he'd passed a recent quiz or that his grade had jumped by several points. He even asked me to help him make a resume, which he used to land his first job at a fast-food joint.

Fast forward, Chris is no longer one of my students, but he's constantly in my classroom. He drops by every day to chat or ask me regularly if I have the time to listen to the hardcore rap music recommendations he gives me (the answer is usually "Errr ... yeah… that was an interesting song…"). He even forecasted classes for next semester and requested that he be a teacher assistant in my class. Chris is still sleeping on his friend's sofa, but his grades are slowly improving. What motivates me most every day when I come to school is thinking about being able to watch him graduate next year, along with all the other Chris-like characters that I've taught this year. I could only connect with him because I chose to listen to him rather than lecture. Getting to the Root of the Problem: Strategies to help students succeed. Happiness is a crucial ingredient of human well-being and health, and the pursuit of which was identified as an “inalienable right” in the US Declaration of Independence. In America, as in other developed nations, many seek material things to bring happiness. Yet, a wide variety of environmental, health and social justice indicators suggest people in developed nations are consuming too much. Consumerism is the idea that increasing consumption of goods and services purchased in the market is always a desirable goal.

The path to peace in the world starts with peace of mind. Participants in this course will learn educational strategies to help students calm themselves, alter their state of mind, and learn how to manage their behaviors. The result is more happiness, less conflict, and higher rates of authentic learning. Strategies will include techniques of self-observation and following the breath. Participants will explore literature and social studies that address the issues of peace.

KEEP STUDENTS FROM FALLING THROUGH THE CRACKS

Don’t lose heart when everything you do to help failing students doesn’t work, because this course will turn that around.  You don’t have to lose students through the cracks anymore, as research-supported strategies based on neuroscience and mindset can help inspire interventions for powerful change. Your instructor, Brenda McKinney, has spent her career teaching, creating programs, and developing curriculum for failing students. You will learn practical, data-driven strategies

MAKING THE WORLD A BETTER PLACE

Climate change, school shootings and political gridlock are indicators of world change. It is good teaching to involve ourselves and our grade 5-12 classrooms in being aware, caring and making a difference. You will explore a variety of critical issues and a variety of web sites including Facing the Future, Awakening the Dreamer and more. Your students will learn that it brings heart and meaning to their lives when they advocate for positive change in their community and in the world.

We live in a new era of technology and terminology, one that has created difficulties and boundaries between the common knowledge, language and perception of our students. This world has opened the doors to dangerous drugs; an inevitable problem our student population will face. Dive head first into the vast amount of online and community resources to combat this dynamic problem.

SUSTAINABILITY FOR YOUR CLASSROOM

Discover dozens of ways to involve your students in fun environmentally sustainable, earth-friendly projects. Learn how to create native plant gardens, water and energy conservation programs, recycling and composting stations and functional, earth-friendly eco-roofs. In addition, low energy transportation options will be discussed, including bicycling and public transportation. Learn about community-based art projects to beautify schools and your neighborhoods. $25 text and materials fee due to the instructor.

This course is based on the required text, "Qualities of Effective Teachers" by James Stronge. Stronge’s work emphasizes that the classroom teacher is a person that makes the biggest difference in studies of effectiveness. Also covered are classroom management, curriculum development, lesson delivery. follow-up checklists and ‘red flags’ of ineffective teaching.

Throughout each day, educators are expected to balance academic demands with the personal aspects of each child. The purpose of this course is to help educators to become more organized in their preparation time and in their teaching style.

TREES: Inside and Out

Trees provide K-12 students an avenue to the scientific methods of observation, classification, notation and drawing. Tree study can also be integrated with writing, math, art and social studies activities.